A mysterious woman fleeing an unknown terror boards the wrong plane at San Francisco International and disappears into the heart of the country. Freddy Ferguson, a troubled detective with a violent past, believes she's the last living witness to a crime that has captivated the nation.

Sifting through the wreckage of her past, he begins to understand who she's running from, and why. Now he must track her down before her pursuers can silence her for good.

A modern crime thriller with elements of Raymond Chandler and the classic pulp novels of the 1950's, this character study wrapped in a tale of crime and redemption was named to Kirkus Reviews' Best Books of 2018. 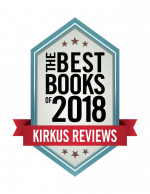 You hear people talk about love at first sight: “From the second I saw her, I couldn’t take my eyes off her.” Yeah, well, train wrecks are like that too. You can’t look away. Love at first sight is a kind of premonition for people whose lives are on the golden path. They have a house and kids and a steady job coming down the pike, and they know right away who they’re going to share it with.

I get premonitions too. But with me, it’s like I see some guy walking down the street—never laid eyes on him before—and I just know he’s gonna be beating the crap out of me in an alley before the day is over.